Updated 20 August 2008: Adagio is obviously a sailboat. Still, certainly our comfort, and possibly safety, depend on reliable electrical supply. And there are definitely times when safety can be compromised by unexpected loss of propulsion. If you feed a diesel engine both clean air and clean fuel it is rare to have an un-heralded failure. Over the years of meeting with long distance cruisers we’ve encountered several cases of fuel problems – often at bad times – like heavy weather. Almost all of these trace back to contaminated fuel reaching the injectors. The heavy weather faults were usually due to water, dirt or biological debris being disturbed in a fuel tank sump, then sucked by the fuel intake.

Like chafe-free parachute anchor bridle attachments, clean fuel is fairly easy to design into a new vessel, but can be difficult and expensive to retrofit. So we gave a lot of attention early on in the design process to the objective of “zero defects” in the fuel department.

Adagio’s fuel system is the result of several years of research, all targeted on the question “how do we ensure we never have an engine/generator/diesel heater fault due to bad fuel in the tanks?”. E.g., one or both engines stop when we are negotiating a narrow reef pass with no wind, under power? Or under sail at night in nasty sea conditions — we are charging batteries, freezing down the reefer and freezer — the generator stops.

The design theme has been simply “always 100% clean, dry fuel in every tank”. Touch wood, but after some 30,000nm, we’ve had two cases of unplanned fuel filter changes. Both were due to a design oversight which I’ll explain after reviewing the original Fuel System Reliability specifications. For the original system schematic, click the thumbnail at left. Here’s a summary from the SUMMARY OF VESSEL SAFETY PROVISIONS section of the Adagio Specifications:

** The reliability of the vessel’s electrical systems is dependent upon the supply of quality diesel fuel to the three engines. Every effort has been undertaken to ensure the reliable supply of clean diesel fuel by means of the Fuel System.

** The fuel supply is isolated in five tanks having a total capacity of 430 USGal. 400 USGal are stored in four integral epoxy tanks, two in each hull. Fuel is directly gravity-fed to all diesel consumers from a central 30 USGal “day tank” sited on the bridgedeck. The system is designed so that at least 20 hours of cruising speed operation can be supported by pristine fuel loaded in the central day tank.

** Fuel filtration and transfer is controlled from a central Fuel System panel located on the bulkhead separating the workshop from the forward machinery space. The Fuel System is comprised of:

** Filtration is accomplished via two series-connected industrial grade high-volume filters. The first filter is an RCI Purifier RC 400-E centrifugal filter which removes at least 95% of free water and particulates. The second filter is a depth-type Gulf Coast Filters model F-1. This filter removes 99.9% of any free or emulsified water present, and all particulates larger than 0.5 microns at flow rates up to 2 USGal per minute.

** Fuel can only be transferred between any of the vessel’s five tanks by processing through the RCI and GCF filter manifold. The Fuel System valve manifold provides for fuel transfer from any of four hull tanks to any other and to the common day tank. The forward-starboard hull tank is also plumbed to the fuel manifold such that fuel can be loop-back polished through the filter manifold to this tank. New fuel loaded aboard is always isolated in this tank and is treated with Biobar and DFT#1500 to eliminate bacterial contamination. It is then tested and polished before transferring to another hull tank for storage. Onboard polishing can be accomplished either by loop-back polishing, or by transferring once between any pair of tanks via the RCI and GCF filter manifold.

** To simplify refueling in remote areas, the Fuel System can also pump fuel from containers on a wharf or adjacent vessel. anual Whale diaphragm pump.

** Vessel operating procedures require that all onboard fuel except the daytank be recirculated through the filter manifold weekly.remote areas, the Fuel System can also pump fuel from containers on a wharf or adjacent vessel.

** The common day tank is managed by an automatic level control system. Two magnetic reed-switch float sensors start and stop day tank resupply at 75% and 95% full, respectively. The day tank can also be resupplied by manual override of the automatic system. In the event of failure of both Shurflo fuel transfer pumps, the day tank can be resupplied via the manual diaphragm pump. All fuel supplied from the day tank is filtered a third time via a Racor 500 FGSS2 filter with 2 micron element (60gph rating, approximately 30-times oversized). While this filter is intended to protect against any small amounts of condensation in the day tank, it is also a third level of insurance of fuel quality.sociated fault. The fault indicators are as follows:

** To ensure that water does not enter any fuel tank in extreme sea conditions, each tank vent line is protected by a high-capacity water-separator which admits only dry air into the tank from vents located just below the sheer.

In summary, clean fuel supply is assured by preventing seawater and bacterial contamination, by immediate onboard polishing of all new fuel, by weekly repolishing of every tank, and by processing all fuel through three filtration stages before the fuel reaches each engine’s factory fuel filter, and all particulates larger than 0.2 microns at flow rates up to 2 USGal per minute.

Sounds good – so how did we twice manage to gum up the Racor FG-500 on the day tank output? Well, Adagio is heated by the diesel-fired Webasto hydronic boiler – whose return line leads to the day tank. After a winter of daily cycles of heat/cooling the fuel in the day tank, condensation accumulates in the stainless day tank. Even though the fuel is always treated with DFT-1500 Hammerdown, a tiny amount of bacteria grow in that water — enough to create a bit of vacuum at the Racor two micron “final safety belt” filter. I say a bit of vacuum because it is too small to read on the remote filter vacuum gauge mounted on the shop fuel system panel.

And how did we rectify that oversight? There are two errors:

1. I didn’t realize that clean fuel pumped into the day tank might be contaminated by “new water”.

2. Though I specified a duplex filter on the day tank output, during construction we decided it was a poor use of the machinery room space. So duplex became simplex, not a problem in light of assumption #1.

We’ve addressed #1 by modifying the fuel control manifold so that the day tank can be a source, and thus can be polished like any of the four hull tanks. By routinely polishing the day tank fuel we remove any water by means of the massive GCF F-1 filter.

I am still studying solutions to #2. There is no point in a duplex filter manifold that is not easy to service. And all the high-rent locations in the machinery space are already occupied. 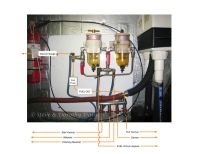 Updated 10 Nov 2010: When I rebuilt the Panda generator in New Zealand this year it gave me access to the bulkhead behind the genset. So the simplex Racor was replaced with a duplex Racor FG-500 plus an in-line Facet solid state fuel pump. The Facet serves either as a primer pump for the two Yanmar propulsion engines, or as a “hot spare” for the Panda genset fuel pump (an identical Facet pump).