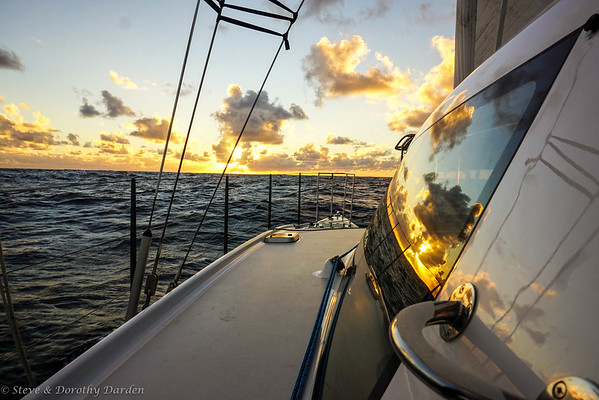 Our 2016 NZ to Nouméa passage was special because we succeeded to align schedules so that Vanessa and Wayne could join us. AdagioJournal readers will remember that some of our most memorable passages have been sailed with Vanessa aboard:

At dawn Tuesday morning we received Rick Shema’s departure report which ended with “Should be a pleasant trip.” That proved to be a good forecast. Rick’s routing estimated passage time of 5 days 6 hours – our actual was 5 days 10 hours of mostly easy aft-of-beam sailing. Two high cells were merging off the Australian coast, so our departure weather looked happy: June 14 departure weather situation: The color shading indicates GFS modeled significant wave heights as per the scale on the right, the arrows are modeled wave direction.

Day 1: Departed Opua at 10:45. The local dolphins were at another party, so they sent a small pod of Orcas to farewell Vanessa as we sailed out to sea, on a 1000 nm passage from New Zealand to New Caledonia. Sunset displays the first night did not disappoint, and the cameras were active. We made 187 nm the first 24 hours.

Day 2: The true wind speed was in the teens, aft of the beam. It was beautiful off-the-wind sailing under full mainsail and reacher. Several Black-browed Albatross circled ADAGIO. Distance traveled on day two was 181 nm. At 0300 hours on day three, Dorothy wrote in the log, “A gentle ride. Clouds at the horizon; stars overhead. The wind is easing slowly, less than forecast.”

Day 3: Full moon passages are our favorite kind, making the night watches a pleasure. The reflection from the moonlight casts a bright streak from the horizon to the boat, rippling and sparkling in the night as it comes. We furled the reacher in 26-knot squalls, and started the engines for a while. Distance sailed on day three was 185 nm.

It doesn’t get much better than this – sailing into the sunset under reacher steering AWA 155 following seas. SOG 7.5 TWS 16.8 TWD 150T

Several ships had passed us, and been tracked on our AIS. Steve’s log entry was, “Crew has all showered and after breakfast is sunning in the cockpit with e-books.” Distance sailed on day four was 193 nm.

Day 5: Winds are in the 20’s, and we are fighting a 1.5kn contrary current for most of the day, making for a bit of a rolly ride. At 1042 am sharp-eyed Vanessa spotted the loom of Pic Nga mountain on Isle of Pines. Wayne landed a beautiful MahiMahi, and we dined on sashimi for lunch.

After checking in at Noumea, we headed out to give Vanessa and Wayne some time snorkeling in several marine reserves in the Southern Lagoon. Ilôt Maître is a great place for abundant tropical fish, and occasionally a Dugong. Ilôt Signal brought more fish and quite a few sharks. Vanessa and Wayne certainly did soak up as many of the sun’s rays as they possibly could, before returning to wintry New Zealand. Thank you for the fine passage and the good times.