We don’t have the whole story yet but our dear friend Warwick ‘Commodore’ Tompkins got some horrible news from Hawaii on July 25th. Tropical Storm Darby moved through the Hawaiian Islands generating violent lightning storms. The night of the 24th Commodore’s Wylie 38+ Flashgirl was struck by lightning, damaging a galley sink thru hull fitting. When that happens to a lead-ballasted monohull the boat would normally sink. Fortunately their Kaneohe Bay friend David Nottage spotted the slowly flooding Flashgirl, quickly arranging to tow the yacht onto the mudflats. David organized high-capacity pumps to begin dewatering the boat when she was about 3/4 flooded. Hero Medal for David!

Commodore and Nancy were on a motor yacht cruise in BC/Alaska when the news arrived from Kaneohe Bay early on July 25. They had to arrange for a float plane to transfer Commodore from the motor yacht to the airport. He connected in Juneau and arrived in Honolulu at 10pm that night to begin the salvage and restoration.

From Warwick’s email situation report answering my question “How is Flashgirl?

(…snip…) huge loss of stuff internally. Engine will survive, but not it’s control panel or wiring. Batteries are OK. All sodden gear now drying out on land. No major structural damage found so far, and there are no leaks. Lightning dissipation scheme appears to have been effective. Sinking due to broken plumbing caused by distortion of the boat at the thunder blast following bthe strike. (…snip…)

The job ahead is long and wearying. My energies are flagging, and eyesight steadily deteriorating. Finances low, all the above make the restoration exceeding difficult. (…snip…)

Restoration is our only option, which suits, because I would not survive long without the boat, and have no desire to “unburden myself”. Probably the better part of a year’s work ahead, and $50,000 US.

Warwick is 84. He for sure has earned the right to be out sailing Nancy around the Pacific aboard Flashgirl. It’s not right that he should have to undertake an even bigger job than the rebuild he had just completed after three years of really hard work in New Zealand. In this photo we are interrupting that work in the Waipapa boatyard: 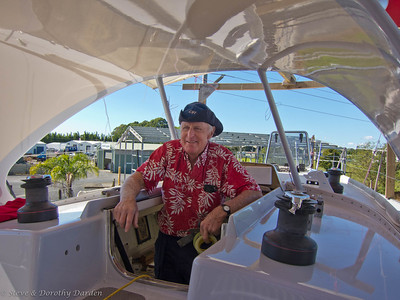 Warwick working on the 3 year refit in New Zealand

We can’t do the rebuild for Warwick but we can help him get sailing sooner. Please send donations to the Paypal account FlashgirlFund@gmail.com that Nancy has just created. I just sent a contribution – it works.