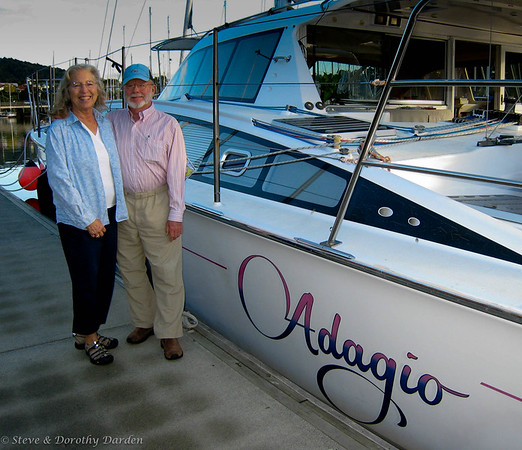 We hope your year has been as full of friends, family, good food, adventures, good fun, sunsets and lovely scenery as ours has. Our earlier dispatches describe and illustrate our 2015, including ADAGIO’s 15 year refit, visits from friends and family, and our passages between New Zealand to New Caledonia.

During all of our adventures, our family in California were having their own. Our grandson David graduated from high school and entered Bard College in New York. He took along his cello to continue playing beautiful music. Granddaughter Sarah, who is now a freshman in high school, continued to excel in horse jumping and dressage. She earned money to buy a Monofin and has aroused the interest of swimming coaches to help her develop her technique. Her new business of animal minding is going gangbusters in her neighborhood.

How fortunate we are to have such a fine life, wonderful family and friends, good health and our lovely ADAGIO. May the New Year bring you your favorite things, places, friends, family and experiences. 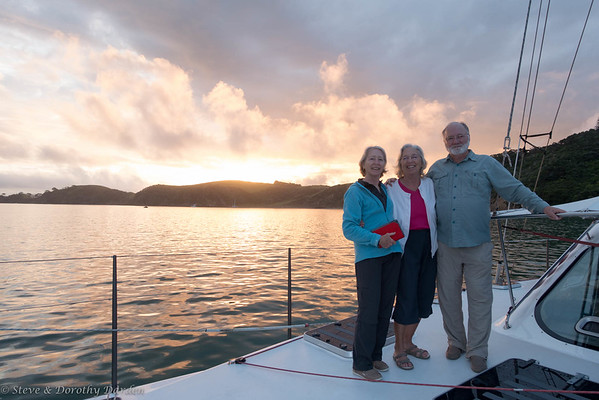 On the 16th of November, Dorothy’s sister, Margaret, and her husband, Fred, flew from Colorado to join us in the Isle of Pines, New Caledonia. Making an ocean passage had long been on Fred’s Bucket List. As soon as they arrived, we began looking for a weather window for sailing to New Zealand. We wanted a “Goldilocks” window, not too early in the season, and not too late to risk playing tag with tropical cyclones. We were keen to “show them the ropes”, in preparation for the blue water passage.

Planning this passage back in September with our router Rick Shema, Rick’s recommendation for this year was a passage towards the end of December. However, with two passengers aboard who had tickets to fly out of New Zealand on Christmas eve, we had to be sure we didn’t find ourselves facing only bad weather options and wishing we had taken an earlier “so so” weather situation. So when Rick reported that we would have a decent weather situation on the 23rd we decided to sail to Noumea for departure formalities.

After a week of making the most of being in Isle of Pines, we enjoyed a lovely off-the-wind sail through the southern reefs. We anchored near Noumea just nine hours after departing Ile des Pins at 0555.

Tuesday morning Steve cycled from one government office to another to complete our outbound clearance. Provisions and fuel were taken aboard, life jackets were tested, ADAGIO was fitted out for sea, systems tested, and we sailed for New Zealand on midday Monday the 23rd.

ADAGIO’s guest cabin is portside-forward over the wing. Very comfy on our normal off-the-wind passages. In typical Kiwi understatement, it’s a “bit bumpy” when we have to sail mostly upwind. While that’s what we had most of the way to NZ, there were no complaints from our hardy crew – though there was a bit of off-watch sleeping in ADAGIO’s saloon.

With four aboard we could run a relaxing 2-on, 6-off watch schedule to NZ. Two hours on watch at the helm/navigation station, followed by six hours off watch, gave each of us plenty of time to rest, to read, watch Albatrosses, Shearwaters and Petrels circling the boat, starry nights, sunrises and sunsets, and to enjoy each other’s company.

At dawn on our sixth day out, we spotted the “Long White Cloud” floating above New Zealand. Sailing south along the coast of the North Island is a beautiful experience. Australasian gannets and Terns dived around ADAGIO as we entered the Bay of Islands. NZ officials set a very high standard for yacht formalities. As always they politely and efficiently checked us in to New Zealand at OPUA port of entry.

In September we had celebrated our fifteenth year of cruising, and now we had returned to where ADAGIO had been built and launched in year 2000. We soon encountered cruising friends we had made years ago, and were eager to hear stories about their recent years of cruising. New friends we had made in New Caledonia continued to arrive, as well as cruisers from Vanuatu, Fiji and Tonga.

Margaret and Fred joined us exploring around the Bay of islands: for hikes, beach walks, climbs to lookouts and native forest walks. Being recently retired, they were loving the life that we live, waking each morning, not really knowing the adventures and beauty that we would enjoy during the day, and meeting the interesting people who somehow always turned up. We were surrounded by such beautiful scenery that Margaret and Dorothy turned ADAGIO’s cockpit into a watercolor studio.

The Isle of Pines. After many years of visiting this special place, we have come to realize that there are many “worlds” on this little island. The local Kunie people for the most part run their own affairs, and are supported by health, education and other services from the French government. Cruise ships come and go, and help support a small tourism industry, along with numerous fine accommodations. Members of the yachting and cruising community begin arriving in small numbers at the beginning of the winter months, and increase their numbers as summer approaches, before departing again before the start of the cyclone season. We have been privileged to spend enough time here to make friends, to get to know our way around the island and to notice the few changes that occur over the years, and actually how little does change.

The twice a week farmers market brings us in close contact with the talented “green thumbs” of the island, including access to edible native plants, snails and locally caught fish. Displays, traditional dancing and food stalls set up for the passengers of a cruise ship, provide entertainment and more food experiences for us as well. The eight different local tribes take turns hosting each cruise ship. I enjoy watching the locals interact at the market and elsewhere, and the children are particularly charming.

Several times a year the local people organize festivals and special ceremonies. The use of pandanus leaves for weaving panels, hats, baskets, birds, turtles, and much more, and decorating them with hibiscus flowers and many others is quite beautiful. The women wear colorful dresses and decorate their hair with flowers. Children swim at the nearby beach, while their families picnic under the coconut palms. There is a lot of laughter on this island, and we are happy to be as much a part of it as we are. Many thanks to our friends Cleo and Albert, Brigitte and Tony for introducing us around, inviting us to take part in the island’s activities, and sharing with us a cup of tea in their garden.

Cloud junkies is what we are, especially colorful clouds. ADAGIO’s cockpit provides us with front row seats for sundowners at sunset. Our 360 degree wrap-around windows let in the beauties of the sunrises and the “dawn chorus” of birdsong. This year we have had fun playing with the panorama setting on our iPhone cameras. We don’t have a spectacular sunset every evening, but we are beginning to diagnose the clouds and are learning to predict which ones will provide the most beautiful displays. We hope you enjoy these, and wish you were here to enjoy them with us.

Not far from the center of Noumea is a lovely park and zoo in a forest setting.  Proudly displaying many of their endemic species, the locals have designed a park for rambling and exploring.  Encountering beautiful birds in aviaries along the trails, shaded by native trees, and in one large aviary which you enter through protective gates.  The best designed setting was built for the national symbol, the endemic Kagu bird.  Protected only since 1977, there are thought to be only about 1000 of these birds in the wild.  This zoo successfully breeds Kagus, and releases them into the wild, about 100 birds released to date.  Kathy and I were careful to be present for feeding time, and were able to watch up close the Kagus’ beautiful territorial displays towards each other, by spreading their wings and lifting their crest feathers.  The attendant pointed out the location of a single Kagu sitting on the single egg in a nest next to a tree trunk.  The male and female share incubation duties, in 24 hour periods, and the offspring stay with their parents for six years or so.  I was pleased to see an endemic Notou, the largest arboreal pigeon in the world. Steve and I had heard it’s unusual call while we were visiting Queen Hortense’s cave on the Isle of Pines.  Another national symbol is Leach’s giant gecko, which was on display in the vivarium section of the park. 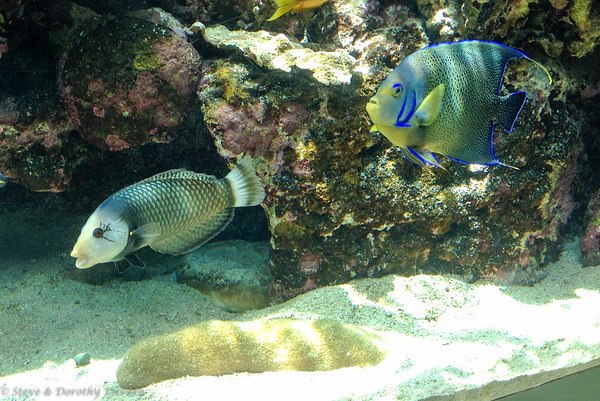 In year 2000 we first visited the Noumea Aquarium, and were delighted by the natural lighting, the selection of native marine species, and that the water in the aquarium is provided by a flow through of clean seawater from the nearby Baie des Citrons. In year 2005 the aquarium was closed for two years for the construction of a completely new facility. All of the wonders of the original aquarium have been retained, and all areas have been expanded and modernized. The original founders, Dr Rene’ Catala and his wife Ida were prominent marine biologists for their discoveries in coral reef ecology, especially the fluorescence of certain corals. More recently, the aquarium has developed techniques for captive breeding of the Chambered nautilus. Two juvenile Chambered nautilus were on display for us to see. Educational displays accompany many of the exhibits, providing scientific information and education. 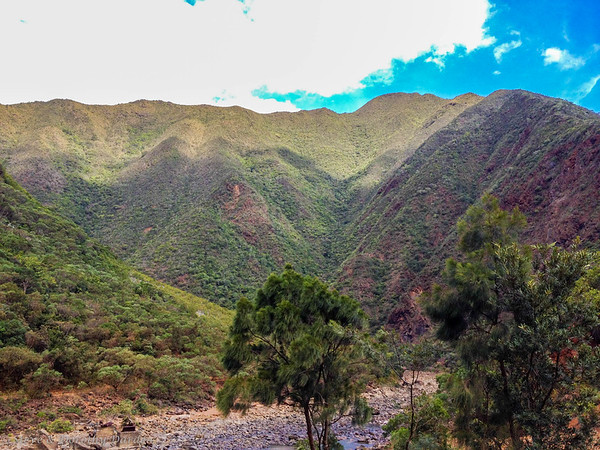 Following up on an ad we had seen at a bicycle fair in Noumea, we reserved a tour by electric-assisted mountain bikes in the Parc Provincial de Dumbea and Reserve Naturelle de la Haute-Dumbea, located north of Noumea. In Dumbea Gorge, dominated by imposing mountains, the earliest road in New Caledonia was built to serve the timber and mining industries. The road follows the Dumbea River, over hill and dale, crossing the river numerous times. The scenery was spectacular, but could only be viewed while our bicycles were stopped, as our eyes were on the rough road at all times. Joe and Kathy tried out a pair of orbital bicycles as well. We are glad to have had this expedition in the back country of New Caledonia, but would recommend it only to experienced cross country bicyclists.